3 Months In: Measuring the Impact of the Google Mobilegeddon Algo

The news about the Google "Mobilegeddon" update struck fear into site owners far and wide. But the aftermath was reportedly not too bad and some cried that the update was overhyped and the algo didn't really make much of a difference.

But here are some stats that tell a different story and according to these numbers, the impact may have been greater than many previously thought.

The drama leading up to the change resulted in somewhat of a let-down when media coverage of immediate results reported only slight changes. But a couple of recent studies based on a broad look at the impact of Google’s algorithm change confirm the importance of mobile sites.

A study by Stone Temple Consulting that looked at over 15,000 search queries and the resulting top 10 results concluded that Google’s algorithm did give a big boost to mobile sites. Mobile site URL’s outperformed non-mobile URL’s in both a greater number of sites that gained rank and fewer sites that lost rank.

Click both links above to see all the graphs and stats.

Did you see much of an impact on your local client's rankings or traffic?

Mobilegeddon Was a Big Deal After All

Google’s ‘Mobilegeddon’ Was a Big Deal, After All
By Alistair Barr, Wall Street Journal
July 18, 2015 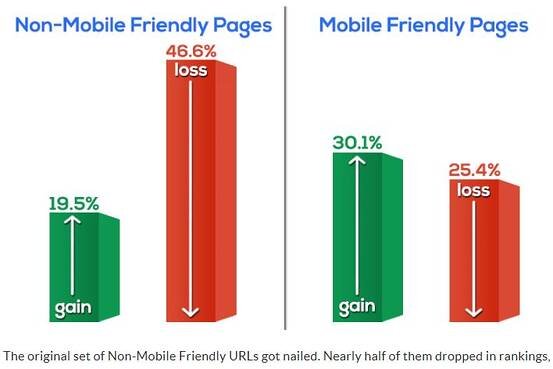 A new study suggests that “Mobilegeddon” was as big a deal as advertised, it just took a while. The report[url]http://www.localsearchforum.com/mobile-social/mobile-social/, from Adobe Systems, found that traffic to non-mobile-friendly websites from Google mobile searches fell 12% in the two months after the changes took effect April 21, relative to mobile-friendly sites. Adobe tracked traffic to more than 5,000 sites, which it divided into mobile-friendly and non-mobile-friendly. Ahead of the change, Google said it would favor sites that looked good on small screens, used bigger text and separated links so that they are easier to tap...

“Mobilegeddon fears have come true,” said Tamara Gaffney, an Adobe analyst, said. The changes to Google’s search algorithm prompted many website operators to alter their sites, to assure that the sites remained visible in Google search results...
Click to expand...