Colan Nielsen said:
I can't believe that Google would take that top of page real estate away from their bread and butter, AdWords.
Click to expand...

I was thinking this as well, until I realized that they just introduced map ads. How long do you think until promoted pages, and promoted locations are included in the first spot?

It seems pretty logical to me. They're building value into a new revenue stream, and forcing us to pay attention to G+ as well.

Does anyone notice any change in ranking factors for this new format? It seems to me that good reviews and lots of reviews seem to be more of a factor than before.

In the comparisons I've done Jason (because I still have both) the ranking order is exactly the same. No change at all.

So I don't think there was an algo change attached. Ranking order is still primarily based on organic factors. But there is chatter about an organic algo change brewing that could cause some shifts.

The extra click is definitely an interesting change. I am looking into it but wanted to see if anyone knew already. Is percentage of businesses that have websites lower in the restaurant industry? Most of the time Google basis it tactics around catering to the masses. If the majority of restaurants don't have websites, that might have been one of the contributing factors to the change.

Just curious if this thought had any value, I could be completely missing the mark and giving Google to much credit.

I don't have any hard data, but I would think that it would be likely that more restaurants would have websites than a "normal" industry. Finding out whether a restaurant is any good is a completely different aspect that normal website trust indicators may not communicate effectively. This normally sends people to various review sites and such. These appear to be surfaced reasonably well with the branded search after that extra click.

For those businesses that are actually paying attention to their reputation everybody may win. The customer sees all sorts of reviews of that restaurant, and the social proof that the restaurant really is decent. Meanwhile the actual restaurant result is still at serp #1 and the phone number and directions are sitting on the right sidebar which is the minimum information needed for direct customer service by the restaurant and getting the customer in the door which is ultimately the goal in this exercise.

The real question will be if the social proof is worth the extra click.

Just found a post from Adam Dorfman of SIM Partners that shares 54 keywords he's found that trigger the Carousel with along with 63 others that don?t.

My guess is that the keywords that trigger it could be somewhat location dependent.

This makes managing the Google Plus photos a little more important. You can no longer throw up a bunch of pictures on Google Plus because the first picture is the one that will show up in the Carousel.

Here are a couple of triggers.

Mike just made some good points:

Greg Gifford said:
huge question - if you click a carousel listing, the SERP changes to a branded search... if you then clickthrough to the website, what's gonna show in GA? Your original non-branded query or the branded query you clicked on??? Could be a data nightmare...
Click to expand...

I'm seeing that the generic query is replaced by the exact location query and only the final query (which Google has so helpfully chosen) is passed on to analytics.

You can see this in webmaster tools under query impressions. I've already seen instances of the same number of impressions for a generic geo-location query but fewer clicks. At the same time, a new query shows up with impressions and clicks that is an exact location name (ampersands and all) that no human would every fully type.

Fun times - as if "Not Provided" wasn't a big hassle already.

"As Dave Rodecker pointed out the other day in his comments on the roll-out of the Local Carousel, the ranking algo that Google is using is the same location prominence algo used in the current/old Google Maps. There does not appear to be any blended/organic influences in the results that I have looked at so far and the ranking matches pin for pin in both Maps and the 7-Pack display for the same search results.

Here is an example that compares: old PACK and new CAROUSEL and Proximity 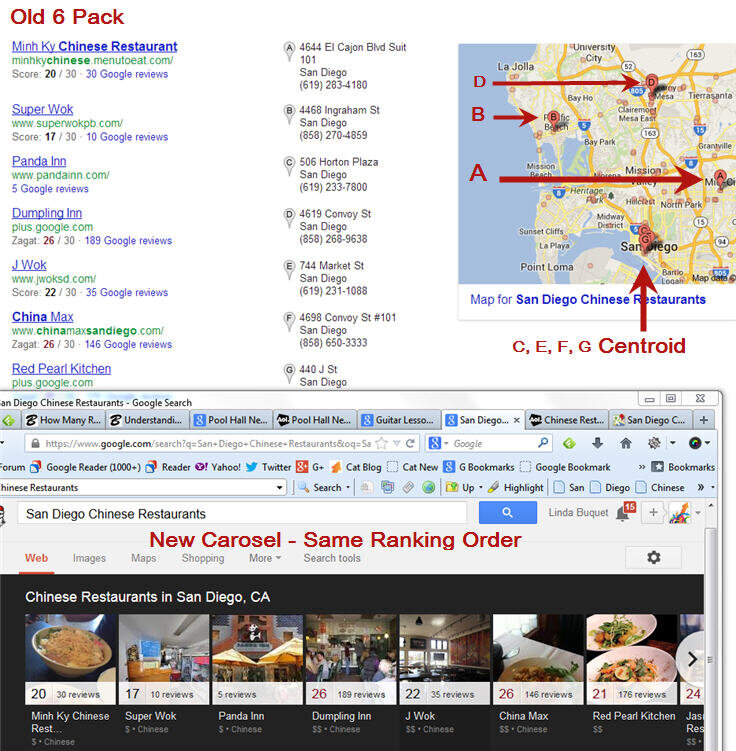 ​
So there you can see that A and B for example are further from centroid AND have fewer reviews
than E, F and G near downtown.

PF Changs, which should be highly prominent, probably has tons of citations, is highly branded, has 110 reviews (vs 30 and 10 for the restaurants in the A and B spot) AND is much closer to downtown than A and B are... is not in the pack or the 1st group of results in the carousel. Changs is on page 2 of maps and you have to scroll carousel to find it.

So to me it does not look like the carousel order is based on reviews, citations, location prominence, but the same blended algo we've had for awhile now that is still heavily weighted toward organic ranking factors. You can see this by doing the same search in AOL which pulls pure organic results from Google. BUT it's super hard to decipher for restaurants because tons of directory, Yelp, Allmenues, UrbanSpoon and other pages get in the way. Easier to see the organic influence on AOL for Dentist, Plumber, Chiro and Attorney searches.

Then in the comments I discovered a more in-depth study with more respondents AND with heat maps.
Plus this study showed something very interesting!

In this study more of the people click the map than anything. That makes me even more concerned about some of the things I'm going to be sharing regarding the new maps next week.

Mike Ramsey just did another more in-depth heat map study over at LocalU.org

It's noteworthy that the #3 and #8 carousel results got the most clicks. Could be placement but likely other factors like # of reviews and type of image came into play.

On Ethical SEO's heat map study above, 32.4% of total clicks landed on the map, but on Mike's below only 14% did. That sounds better. I really didn't think that many people clicked on the map.

WOW - has anyone else seen this yet?

Just doing a search for a client and this came up - very nice...has anyone else seen this yet?

It's a huge change so Mike Blumenthal posted a huge list of articles about this change.

Hi Shonda, thanks for sharing.

We've been discussing for awhile in these threads (including pre-launch discovery).
Lots of different screenshots and analysis below.

Moved Shonda's thread into that 1st link the "officially launched" thread to help keep the discussion all in one place.

Another view today from Barry Schwartz:

Google: You Are Ugly

I just can't get over how ugly and unattractive some of the Google search results have come with the addition of the expanded local carousel.

I thought maybe I was the only one who felt it was ugly but no, many do. The reactions on Twitter, via email and now on the forums, all feel the same way. Now, I am not saying the results are not useful. They may be, but they are ugly. Perception is a key factor in relevancy.
Click to expand...

Wow, what a radical change. Not only is it very ugly as can be, it's not useful. For a search for three metro areas that I frequent for restaurants it turns up almost the worst choices I wouldn't dine at. There seems to be no rhyme or reason how items are displayed, but I'm sure they have a super secret alogo that gives really bad results. Seems much worse that the old local section plus it's just so in your face. It does move organic results up further. The older interface seemed to list local places now it appears that Google is now recommending these places. Why would Google get rid of their paid ads. I don't see any, I'm using IE. Why would they release such a bad product? Guess it's our task to figure out how to influence the "Carousel" for our clients. Lots of good feedback for Forum members Thanks
You must log in or register to reply here.
Share:
Facebook Twitter Email Link