Google+ Local "People Talk About" Section...where is it coming from??

So I was doing some research for one of my clients and there's a number of listings in top 7 that do not have organic rankings or very optimized places page. What they do have are these "people talk about" section filled with keywords.

Do you guys see the same thing? Also, are these kwds coming from images or reviews? How would I optimize that?

Any help would be much appreciated!

P.S. Also noticed that frequent posting to POSTS boosts ranking, do you see the same?

Re: "People Talk About" Section...where is it coming from??

Hi Dan, do you care if I move this to the public forum where it will get more play.

I'd like to add some insights but would like it not to be hidden in the private forum if that's OK with you.
W

Re: "People Talk About" Section...where is it coming from??

Post moved to public, thanks for bringing this up.

I actually have quite a big to share on this, but am swamped and need time to write it up. So stay tuned for interesting details coming soon.

But the quick answer to your question is those details are mainly coming from the Google reviews but also sometimes come from around the web. I think primarily other reviews.

BUT as you'll see when I post more details it's not always that easy to control what phrases she chooses to feature on the listing and often those phrases can be totally destructive to a business as you'll see in the examples I'll be sharing.

OK so here are a couple cases I wanted to point out where the algo arbitrarily pulled out and associated sentiments that are not only NOT representative of the business but extremely damaging.

A family friendly florist in the "bible belt" that had the words "sex toys" in her "People Talk About" snippets. These words are NOT ANYWHERE that I can find. Certainly not in any of her reviews.
Here is the thread at the Google forum.

In that thread someone said their competitor's names are in their snippets, so that's not cool either.

I'm in a private forum with a bunch of Dentists. This Dr's snippets, embedded in new maps and on his profile in classic maps say... (Note I don't have permission to share so obfuscated a bit)


new dentist ? horrible experiences
(Note: I don't have permission to share so obfuscated a bit) 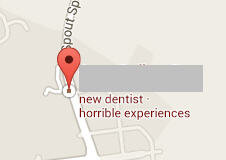 And here they are in list view in classic maps 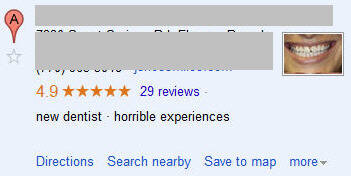 Potentially VERY damaging to a small word-of-mouth practice!​
About 8 reviews say things like "I'm so happy with my new Dentist, Dr John Doe' so I get why the algo surfaced that, BUT it makes it sound like he's brand new and he has a mature practice.

horrible experiences - only shows up once in reviews and it's not AT ALL about him. The review says: (Again edited slightly to protect anonymity)

"I first want to start out by saying thank you to Dr John Doe. When I first called and spoke the office I was petrified. Like most people I didn't like the word dentist. I would rather lick asphalt than have to relive the horrible experiences through out my life that I had with dentists."

So the ONLY place anywhere that had the phrase horrible experiences was in that single review AND it was not about him, it was about previous Dentist's she'd been to.

I told him to contact support to see if they could/would fix it.

Support said: "The engineers have reached back out and stated that at this time, they cannot remove terms for reasons such as being unclear or negative. These terms are a piece of our search results and we try to avoid editing or creating bias in what we show."

The Dr said: "Seriously....this is so messed up. I mean, isn't that almost defamation put that under my name when no-one even used those exact terms literally, and especially not in regards to me?"

The Dentists in this thread (not my forum, somewhere else) are pretty up in arms about this.

I'm not sure what department is in charge of this feature, but it's not controlled by the department I work with at Google and it seems they are not willing to fix these issues, but we are trying to get them to.

I'm sure to some degree it's like reviews and Google does not have the time or interest in playing judge and jury to investigate thousands of complaints to see if the comment is valid or not.

This type of automation can have serious consequences for a business.

I wonder if whoever is in the ivory tower and making the decisions in that department ever thought "What if that was my practice and my patients were telling me that my listing on Google said 'horrible experience'. How much damage that could do to my small practice? Worse yet, I wonder how many potential new patients would simply surf away and never call!"

Sadly I don't think the people that sit in ivory towers know how to think like that!

Thank you for the very detailed reply!

I will look into this more closely and see if I can find any patterns.

Very interested to see if there's any progress with this. I feel like my "People Talk About" is holding me back and I'd love to see a roadmap for changing it.

Linda, your cases are so, so excellent--and infuriating! Thank you for sharing.

I'm sure these issues are unintended consequences of Google's unwavering allegiance to its algorithms. But they are damn serious consequences. And they underscore how calling Google's output "organic" obscures the fact that there can be some very serious human error in there.

But back to the OP's question, I suspect that your cases also help us see the imperfect, man-made algo at work in ways that we can use. Our team is now pretty deep in natural language processing (NLP) on review data specifically, and one of the relatively straightforward applications is to identify meaningful or even "charged" phrases (.e.g. "horrible experiences") in a word soup. That is low-hanging fruit for Google's engineers. A much more difficult (impossible?) task is to identify the context of the phrase in a sentence or paragraph.

Beyond charged phrases, Google is almost certainly interested in surfacing clickable ones (e.g. "sex toys") irregardless of the exact importance. And they have the petabytes of data to know clickable phrases when they see them.

I believe a business/marketer can optimize for this new reality by guiding customers in the review process, educating them on what makes a *useful* review -- that is, useful for other customers *and* for machines that digest reviews and spit out a two-word summary. (Google is late to this game, by the way: Yelp has been doing it for years.)

I've written a bit in this forum and elsewhere about guiding customers through writing reviews, but I'd be very interested to hear from and support someone here who wants to specifically try to tackle this objective: optimizing review marketing for the "People Talk About" section. May make a lot of sense to do!

Just wanted to bump this conversation. Joy Hawkins just started a thread over at the Local Search Pros G+ Community asking about Studies. You can see her post here.

It got me thinking about using the "people talk about" keywords of competitors and injecting them into the introduction without looking to spammy. I pulled several from one of our clients cities and got the following:
beautiful smiles
dental care
lingual braces
office staff
invisalign teen
metal braces
invisalign
office and staff
dental procedures,
nvisalign braces
orthodontic services
wearing braces


Has anyone tried this method?

Thanks for sharing Joy's post from the community Justin.