But I'm still seeing almost perfect correlation between that pack and PURE organic.

Except for directories and listings are are omitted from pack, the top of the pack still matches pure organic. So I think top of pack may still be blended. But that's the only one I've checked. Will run some more comparisons.

Here are some other things I found.


1) It looks like Google used to do title tag changes in the pack, but they don't anymore.


2) It looks like there are always 10 organic result now, whereas it would fluctuate before.


3) There used to be authorship photos in the pack. I can't find any now.


This looks like a fairly disruptive shift in the pack results. Possibly a step back to the old way they were generated packs before the blended algo.

Have a feeling still this is just a big shuffle leading to something more dramatic.

ANALOGY: My feeling is we're at a point like this: She stirred the pot up before adding the final ingredients. We walked in the kitchen before she was done and thought it looked like she was making tomato soup. But after everything is added, we'll see she was cooking up a whole new style of chili. Like chicken chili or something different that we did not even expect.

Weird analogy. It's Friday and I'm burned out!
But my spidey senses tell me she's working on cooking up a big surprise.

Then again, maybe just a hiccup and the old Places algo got pulled out from under a rock like the old crusty crappy one-box results did.

OR it's a Halloween joke and she's just trying to scare us.

I agree Linda. Something bigger is likely coming. It makes me wonder why they'd take a step back with the pack results.

Perhaps they need to revert back to a previous version while they revise and roll out the new and improved version.

Will be interesting to see how this evolves!

Look at this Google test that Dr. Pete caught in the wild:
https://plus.google.com/+SEOmoz/posts/ZLQd79n3Wtj

I think that ones related to a new branded search layout SearchEngineLand just posted about.

I wonder if the other local SERPs results we are seeing have anything to do with the G+ page design update? Google+ Local Display Update - New About Page Layout

Agreed. It's branded. Still interesting. I doubt it's related to this new pack stuff though.

I'm see some local packs with Big font others with Little font like we used to. Still the listings don't always line up with the Map results.

I also think this is a prelude to something bigger.

I noticed that some of the one box results are now displaying a full set of listings. Does anyone else see that too?


Jamie Steigerwald said:
I noticed that some of the one box results are now displaying a full set of listings. Does anyone else see that too?
Click to expand...

Jamie I could take that a few ways, so to be sure I'm clear.

Are you saying cases where there was a BAD one box (or what some are calling a Linda box) and now the 7 pack is back? Or do you mean something else?


keenan said:
I'm see some local packs with Big font others with Little font like we used to. Still the listings don't always line up with the Map results.
Click to expand...

I never did see or notice the font size change.

For awhile over weekend I saw a color change. The blue links in SERPs were BRIGHT blue and the green URL was brighter too. Stars looked brighter too. Almost neon colors, I didn't like it.

I gave up trying to analyze because it seems kinda flaky and inconsistent. I don't think she's done tweaking the dials yet or pushing out the final update she's working on. So I'm going to save my carpal and wait til the dust settles.


Linda Buquet said:
Jamie I could take that a few ways, so to be sure I'm clear.

Are you saying cases where there was a BAD one box (or what some are calling a Linda box) and now the 7 pack is back? Or do you mean something else?
Click to expand...

I am refering to the BAD one box. Search term is "Irvine home for sale"


Jamie Steigerwald said:
I am refering to the BAD one box. Search term is "Irvine home for sale"
Click to expand...

You said "I noticed that some of the one box results are now displaying a full set of listings".

But I'm still seeing a one box.

I am also now seeing the one box. Either I was mistaken earlier or it came and went. I will remember to take a screen shot next time it happens.

I've been noticing this for a couple months now. Thought I was going crazy. I do notice once and a while that a couple positions might switch. I usually see this in the #1, #2, and #3.

I was going to work on a new post about this update and still might, but in the meantime Nyag just did a good one. He agrees that it looks like the "Old" pure Places algo is what we are seeing and points out the reasons why.

Google Shifts Back to ?Pure? Local SERPs. The New Normal or Just a Test?

I still think this is temporary and have a feeling something much more dramatic is about to happen.

Back in the old days when local was not as prominent or discussed, doubles were not such a big deal. But NOW? You can bet as business owners start noticing all the doubles their competitors are getting they will be screaming. Of course if they are the one getting a double, they will love this update.

But I don't think Google's intent is to have so many businesses getting double spots on page one.

Most searches I'm looking at... A, B, C are all doubles and also rank in organic on page one.

This is EXACTLY what the old Places algo used to do. And it makes sense because in the blended pack the top 3 usually ranked on top due to their organic strength, then the ones lower in the pack were back-filled from maps. So the top 3 that rank organically, their organic is now separated and they get both a pack and an organic.

So the more I look at this the more I'm convinced we just went back to the OLD algo. As Nyag said, it has every sign and symptom of the old Places algo.

Here's a screen shot of the A, B, C doubles. I have a feeling if you look carefully you'll find this for almost every search where there are strong competitive organic listings.
Top 2 - 4 will be doubles, just like in blended, top 2 - 4 would be pulling from the top organic rankings. (Depending on market and competition, it varies.)

If you missed my previous post about that phenomena (organic controlling the ranking order at the top of the blended pack) here it is: How the Google Local Algo Really Works - What Rules the Ranking Order 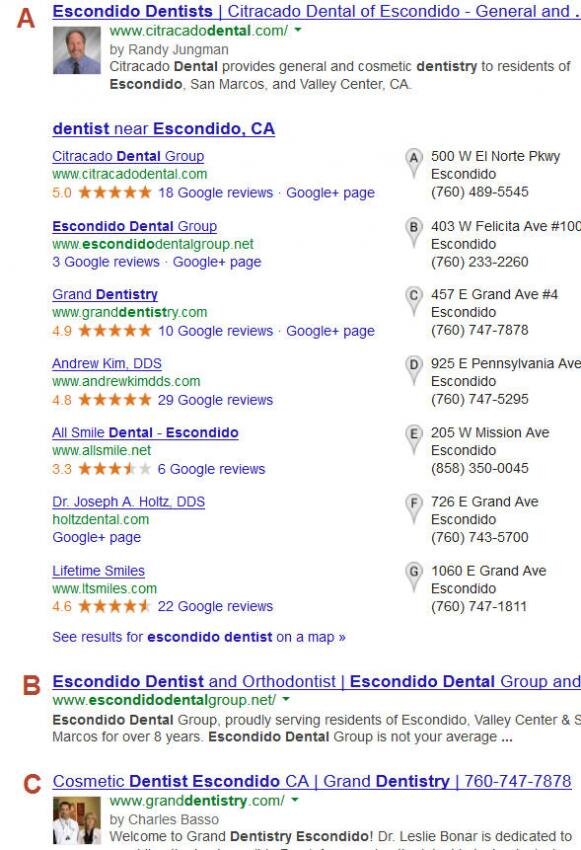 Changed title, since this evolved into a pretty big update as folks here kept discovering more of the changes.

Plus moved from G Local to G Local IMPORTANT, since it does appear to be a pretty major update.

Thanks Colan for your initial thread and observations, which it turns out were just the tip of the iceberg!