Currently having a issue with two of our Google Places Listings.

The correct listing is:


Potential customers are seeing the wrong listing and have reported this issue back to us. 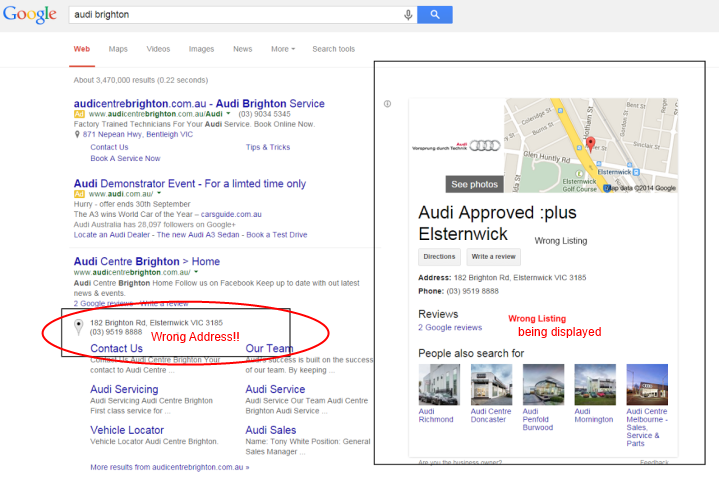 We have contacted Google multiple times about this issue (phone and email) they told me to delete the Elsternwick listing (the title has actually changed to Au di Approved plus - P reowned after we deleted it) from our account which we have done to get this solved quickly.

However it has been a week and nothing has changed. And after reading the help guide, it mentions listings may still remain after deletion.

Any advice on where to go from here?

Yes removing from dash won't remove a listing from maps.

I'm not sure I understand and need a little more info.

You said "two of our Google Places Listings".

And it sounds like you had both listings claimed?

So what is situation? 2 different locations? Both still open and valid?

Or was one the old address and they moved?

Thanks for your response.

There are two listings. They are two seperate businesses, in different locations. One for used cars the other for new cars. The used car dealership is appearing as the address for the new card dealer (they are in 2 seperate locations). Its sending people to the wrong dealership.

The address should be 869 Nepean Hwy Bentleigh VIC not 182 Brighton Rd, Elsternwick VIC 3185

Hope that explains it better.

That's what I thought, but it didn't make sense to me that you'd delete one if it was a valid location you were in charge of managing.

And Google telling you to delete it makes no sense either.

Just because it's now unclaimed does not mean it will stop ranking, plus it's still a valid business that should be on the map, so I don't understand why they advised that move.

But it looks like the correct name for the business IS "Audi Centre Brighton" so all unclaiming did was make that listing look bare with a wrong name.

The problem is on the organic side. Google search is just making an incorrect match and it's doing it in part because unfortunately the location you don't want to rank is on Brighton Road. The one you DO want to rank, does not have Brighton in the address. So when you search for Audi Brighton, that's the closest match in the algo's eyes.

I don't know what can be done. Even when we've escalated cases like this the Google local team could not really do much because it's the automated organic algo that's making the incorrect match. It's nothing to do with the local pages themselves - other than the street name and you can't really change that.
You must log in or register to reply here.
Share:
Facebook Twitter Email Link