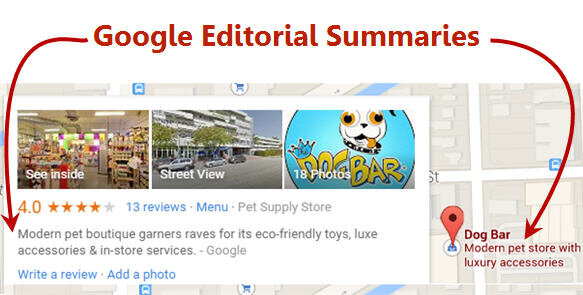 Have you ever noticed descriptions on Google+ Local listings like the ones above? There are actually several types of review and sentiment snippets that can show up on G+ Local pages, most are algo generated.

The one above however was written by a human. Notice is says "Google"?

I discovered the following Google help doc a few months ago and have been meaning to share. I've replied to posts here and there with the following information too, but the topic keeps coming up. So I thought I should do a full post I could point to, about how all the various snippets are generated.

Editorial summaries are short descriptions compiled by experienced editorial writers designed to give Google users a quick snapshot of popular businesses. These summaries are phrases or sentences (such as the example on the map above: ?Southwestern fare in a modern setting?), which you will often see when you click the business on Maps.

Editorial summaries show on the map or alongside review and rating information, such as in the ?review summary? section.

Keywords from the web

Keywords are single words or short phrases (such as the example on the map above: ?corn tortilla - chipotle sauce - sweet leaf?), which you will often see when you click the business on Maps.

Review snippets are algorithmically selected quotes from Google users that provide info on the keywords most mentioned by reviewers.
Click to expand...

Above are just brief snippets. Head over to read the rest and see the screenshots.

Here is a previous discussion at the forum:

<a href="http://www.localsearchforum.com/google-local-reviews/21900-google-now-summing-up-reviews-its-own-words.html">Google now summing up reviews in its own words?</a>

I may be late to the game on this one, but I just noticed: Besides the now-elderly "Review Summary" features including rating distribution, average rating and "People talk about" list of keywords, Google appears to be adding its own stylized narrative summation of a business's reviews...
Click to expand...

I wanted bump this thread up because in light of the recent removal of the carousel and introduction of the new 3 pack, it appears this "review summary" is gaining prominence and may be more important as that is what google is showing in the new local results.

So I am wondering if anyone has had any success in determining where Google is getting this from (writing on their own or sourcing from somewhere else) and how a business could go about trying to influence Google to include a summary on their business. It would seem that a business that does not have a nice summary could suffer from a lower CTR than its similarly positioned competitors.
Click to expand...

The review snippets or sentiments are pulled from 3rd party sources and reviews.
It's all algo generated.

I've had to help a few businesses that had erroneous snippets. Much like reviews, Google won't moderate and investigate to see if comments are valid. They'll only change if they are blatantly bad or wrong. For example I helped a florist get rid of snippets that said: "find adult, valentine's day, sex toys"

HOW TO DEAL WITH BAD SNIPPETS?

Like I said it's tough to get these removed or edited unless it's very obviously erroneous. But here is a troubleshooting you can try.

Or if you have an especially bad one, like the one above, call support. If that does not work, then post in the Google forum then ping me the link to your post in this thread and I'll escalate to Google.

H/t to Joy Hawkins for asking Google how the editorial snippets were generated this week, which prompted me to finally write this post. I created the image above based on an example she brought up too.

What do you think???

Had you seen that help doc before?

Thanks for this great post, Linda. Ive only recently begun noticing these and was wondering how they were generated/changed/deleted. This is very helpful!

For the Editorial summaries you mention it almost looks like those used to come from Zagat. I wonder if Google may start using snippets from reviews by authoritative Local Guides (Level 3+) instead?﻿

Yes you are right Nick. I have seen some that seem to come from Zagat. Really good point about the Local Guides. I have not thought about that.﻿
A

My small sample set shows that Google will pull these from just about anywhere for less emphasized/more general industries than restaurants/hotels. Check out this example on hhgregg (screenshot). Description: Chain offering a wide range of home appliances & electronics, plus furniture & mattresses.

ablais said:
My small sample set shows that Google will pull these from just about anywhere for less emphasized/more general industries than restaurants/hotels. Check out this example on hhgregg (screenshot). Description: Chain offering a wide range of home appliances & electronics, plus furniture & mattresses.

Interesting, thanks for the info.