If I run a number of random searches in Google Maps I can find a number of cases like this. I'm wondering what's up with this and I'm wondering if this can be used as an indicator of some kind of problem with the listing.

Notice that Water Tower Dental Care ranks #2 in Google Maps, but their photo isn't showing. Now notice that they don't rank in the 7 pack in a web search: https://www.google.com/search?q=chicago+dentists

Very interesting! What do you think? Could this be a new way to identify penalties or problems with the listings? 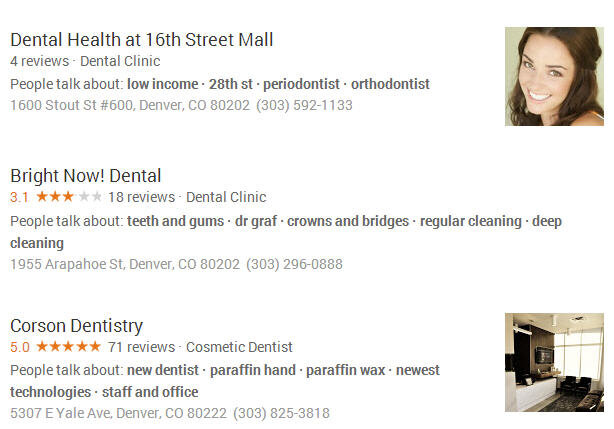 ​
Note from Linda: Added image to post for G+ sharing

I'm stumped. The only pattern I'm noticing is that most of the no-photo listings aren't haven't been upgraded. They must be stuck in the old dashboard.

Interesting Darren! Good catch and thanks for sharing!

But I'm seeing different results than you are and can also explain some of the penalties I think.

I assume we are using CLASSIC maps??? That's all I use for research.

For me Bright DOES have an image in maps search.

But Dental Elements is missing image in maps and it DOES have images on listing and it's also upgraded to G+. However it's cover image is a logo and Google does not like logos. So that may account for that one?

Notice that Water Tower Dental Care ranks #2 in Google Maps, but their photo isn't showing. Now notice that they don't rank in the 7 pack in a web search: https://www.google.com/search?q=chicago+dentists

Very interesting! What do you think? Could this be a new way to identify penalties or problems with the listings?
Click to expand...

Again I see image in maps for Water Tower. But the reason they are dropped out of pack is likely due to violations (city in cats) but I don't usually see penalty for that. More likely it's due to their dupes which are not just Dr dupes but also have practice name in them.

hmmm, now I see you may be looking at new maps. While I was using classic.

So I used your new maps trick for Seattle Chiropractor which is a market I watch and have posted about some of the spammy, violation filled listings.

Seattle Chiropractic and Wellness Center (seattlefamilychiro . com) is missing image even though it has one and is upgraded.

It's one I've posted about that is SUPER spammy with spammy description and cat violations. It's been jumping in and out of pack but has been in the pack and #1 for awhile. So even though it's missing image and is spammy, still ranks and it not penalized.

Tuttle is missing search image, but has images but no cover image.
He has cat violation, Seattle in cats, but still ranks.

So I'm not seeing enough rhyme or reason for this to point to a penalty. Results seem to be really mixed. So I would think maybe it's just flakiness or something else.

Thanks for checking it out Linda! Yeah, I'm using new maps. I only looked at a handful of listings last night, so not enough to come to a firm conclusion. I think there might still be something to this though. I'm going to dig a little deeper and I'll let everyone know what I come up with.

Ya I def think it has merit and want to check it out more too. There has to be some type of pattern for why some of these aren't showing images.

One consistency I did find... Dental Elements is the only one I found that is missing image in both new and old maps search - yet has a cover and upgraded listing. And it's cover image is a logo.

But that's not the issue with the others. More exploration to do.

Usually Fridays are dead, especially holiday Fridays. But you guys are sharing some juicy meaty sizzle tips and throwing out some great food for thought.

Like Kate's post about why the main category "Dentist" is not showing in source code on the G+ L page....

I'm stumped. The only pattern I'm noticing is that most of the no-photo listings aren't haven't been upgraded. They must be stuck in the old dashboard.
Click to expand...

Interesting point, Phil. I have an old client that I still consult with from time to time. They were just upgraded to new dash and most of the time there is no photo in search results, which I find very odd. Is there a way to tell if a listing (any listing) is still in the old dash without having access?

"More likely it's due to their dupes which are not just Dr dupes but also have practice name in them."

I've seen both rank, I'm just wondering what the pros thoughts are on this... maybe it needs a new post...

*say they're a real estate agent

...I should really get back on the coffee train...

21Development said:
Is there a way to tell if a listing (any listing) is still in the old dash without having access?
Click to expand...

I've wondered this many times when troubleshooting too and have not found a way. If there is a short less than 200 char desc and only 5 cats that could be a give away. BUT could also be they are upgraded and just have not expanded on either too.


HurricaneK8 said:
"More likely it's due to their dupes which are not just Dr dupes but also have practice name in them."

Kate one of the reasons not to include the practice or brokerage name is to help avoid merges. They would all have the same brokerage name, address, phone and cats. However merges don't happen as much any more. And if it's a real world rule in real estate, then that's the way they need to do the name.
R

Try adding the profile photo from the G+ page instead of doing it through the dashboard and check if it will appear on the SERP. It worked for us (the photo appeared instantly).

Hey! I figured out what's going on here.

In the dashboard, there is a section for "Maps & Search photos". The description of this section is "When a user searches for your business on Google Maps or Google Search, these photos will appear alongside the rest of your business information."

The client I was working on had no photos in this section. I added one, and expect it will start showing for them in the next few days/weeks.
You must log in or register to reply here.
Share:
Facebook Twitter Email Link