Reviews on my listing

Hello everyone, i found in the reviews of one of my listing i have the same comment (coming from TripAdvisor) translated in more than 15 languages. Is exactly the same review (here i attached some of them). I look in TripAdvisor and it only shown the original comment (English).
My question, is this count as one review? Or it counts as 20? Is a one star review, i can accept one, but im afraid that is count as 20 of the same review just different language. 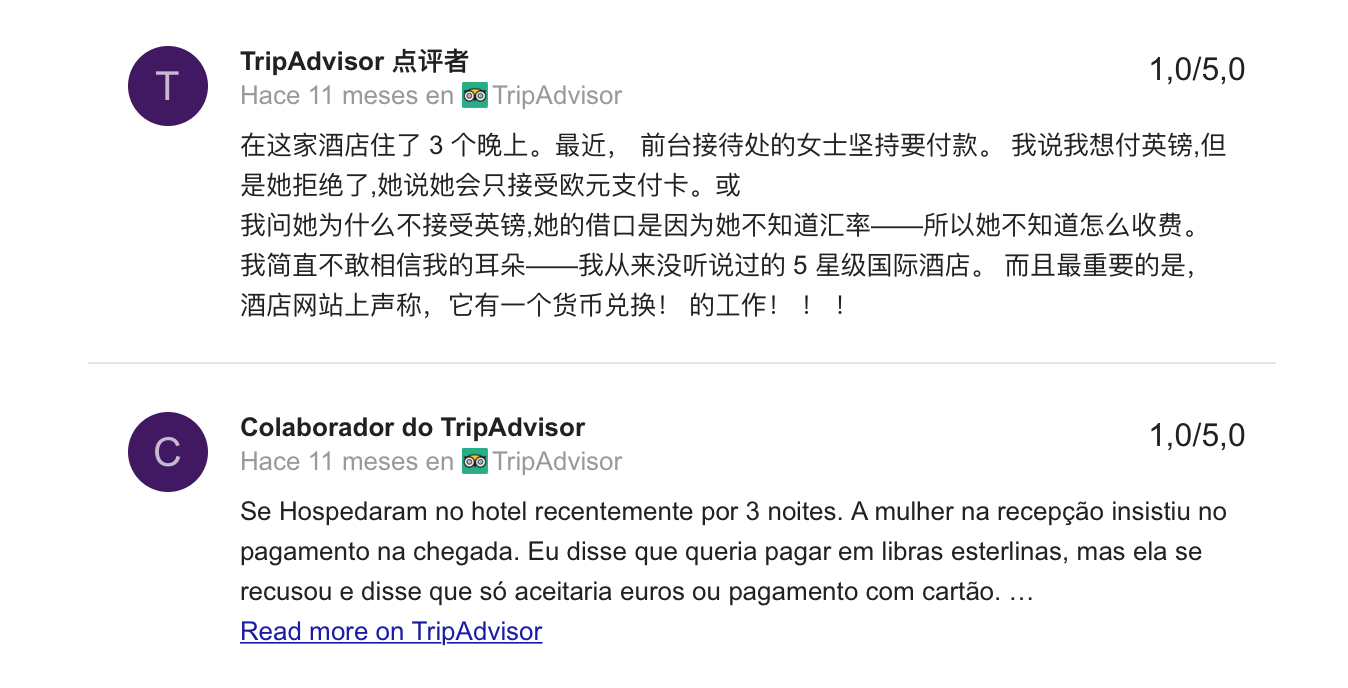 This is clearly a glitch, it's only one review which in error appears several times.

I suggest you make TripAdvisor aware of this anomaly so that they fix the issue.

I agree it's a glitch. Where is this appearing? On your GMB listing?

Hi @Cherie Dickey , yes in the reviews that appears in my knowledge panel.

Ok. I found your listing. I'm not 100% certain how to deal with this as I've never seen anything like this before. Google says to reach out to TripAdvisor to correct the review issue, and then it will be fixed automatically (Frequently asked questions for hotel owners - Hotel Ads Center Help). But I can see that there is only one review on TripAdvisor, so that's not gong to be helpful.

I would say that this is a glitch, and Google for some reason is pulling the same review from multiple language versions of Tripadvisor's website. Here's the same review, in Russian, from tripadvisor.ru:

I'm seeing that it's also happening with other reviews as well:

From what I understand, the schema on your website is what tells Google to pull this kind of stuff into your listing. I don't know enough about schema to identify what the issue might be, or even if that's for sure what's wrong. I am seeing multiple languages in your schema code, so maybe? Hopefully someone better versed in Schema can chime in.

I would recommend reaching out to Google support on Twitter as a first step. Explain the issue to them that Google seems to be pulling the same reviews from Tripadvisor onto your listing, but in multiple languages that seem to be coming from different Tripadvisor domains. The reviews only appear on Tripadvisor one time, in one language - but there are multiple domains for different countries using different languages. Hopefully they can help.

I had no idea Google was adding reviews in from different review engines again.

Is this just for hotels or did I miss an update?

I've never seen it like this before... I've seen the star rating from FB, etc in the KP, and have had a few clients ask for the schema to be added (it was already there). I think it stopped for a while, and then was rolling back out. But I've never seen reviews be pulled in where actual Google reviews are like this before. I'm not even sure Schema has anything to do with it like it does the star ratings from other review sites in the KP... it's a head scratcher for sure.

@Belen C I'd love it if you could keep us all posted about what happens with this!

I think it has to be the hotel integrations Google does. They have so many more features available to them than any other industry it seems like. And it seems like the features go through a 3rd party vendor. No idea honestly.

With hotels (big hotels with a lot of presence online) what Google does is to integrate the reviews of the partners (TripAdvisor, Expedia) plus their own. Since this started last year it was always like that. Most of the information that appear in the knowledge panel is data that google takes from the main OTAs (like stars that appear under the hotel name, descriptions).

Well new update Google confirm me that they are count as separate reviews.