Some of you may be aware there is a big buzz about an organic algo change and speculation about whether it's Panda or Penguin. Google has confirmed it's not either one, but won't say what it is. See Barry's post.

I was discussing the update with Dr. Pete an others on Google+ and someone brought up the fact that San Jose Plumbers changed from a 7 pack to a 3 pack. I went to check it out and discovered something disturbing in that 3 pack.

Sure hope what I noticed in the SERPs is just a glitch not a harbinger of things to come! 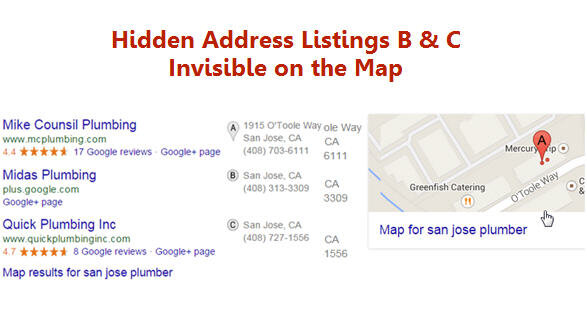 ​
When I 1st saw the 3 pack I just glanced at the map and thought it was one of those brand confusion one-boxes. But then I saw there were 3 plumbers in that pack.

The 2 that are GOOGLE COMPLIANT and have their address hidden, are invisible on the map.


Hoping it was a glitch, I went to my small town where I know there are lots of plumbers with hidden addresses. This is what I found. 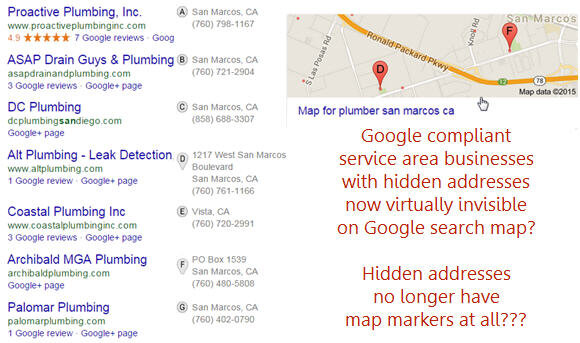 Again only 2 out of the 7 are showing with markers on the map. All the compliant businesses with address properly hidden don't show up. So if a consumer were to glance at the map to see who's closest it appears there are only 2 to choose from.

But then I checked several other packs and they all showed normally with round markers. So again not sure if this is just a glitch with those 2 packs OR if she's testing of some new display change. Sure hope it's not the latter!

SABs with hidden addresses as you know normally show with a round marker instead of teardrop. BUT they usually show. EXCEPT on new maps where the markers stopped showing for hidden address businesses awhile back.

I only had time to check about 10 packs. 2 out of 10 were bad, but wanted to share and see if anyone else has noticed this?

Can you check some markets and tell us know if you see normal packs with round markers for hidden addresses OR ones like above where hidden address businesses are invisible on the map?

Interesting find Linda...great analysis so far. Is this then an update to the Pigeon Algo or do we rename this to - - Pheasant ?

Ive searched several other cities plumbers and it seems they are still showing the tear drop for hidden addresses - see Boston.

Thanks Brian and do let us know what you find. The rest of you too please!

Dr. Pete is presenting on Local Packs tomorrow at LocalUP, so I told him I'd try to get more folks checking to see if just those 2 packs are a fluke or if it's a wider issue than that.

But there are 2 in the pack. The other is hidden address and invisible on map.

Not seeing it in my area with landscapers, plumbers or hvac service. That's about all I have checked so far.

Is this an attempt by Google to social-engineer businesses into actually purchasing/renting and utilizing brick and mortar locations?

Plumbers with hidden addresses still showing with the circle marker here in the UK. But it just may not have been rolled out to us yet.

I know for a fact I was seeing this yesterday for something but can't remember the query now.
Latest Blog: Does Adding Keywords in an Image Filename Help Ranking?

I noticed it too on a few service area businesses. I don't think this is a great issue. If you click the map - the locations are still there marked on the map. The markers should point to physical locations (as in come to my store front business). Overall, I see this as a step in the "right" direction. Although, i can see some scenarios were this may be a problem. ﻿
Click to expand...

Yes but if there is only one marker on the search map and other 2 are hidden, if you click on the marker on the map (the only one showing) it takes you to that one business. The other 2 didn't have a shot if someone goes that route.

There are other areas of the UK where the round pins are still showing.

[locksmith in london] displays a round pin in the map, but [london locksmiths] doesn't (for the same company).

I'm seeing the same thing when searching for "Toronto Electrician"

My guess is that it's slowly syncing up with the new Google Maps which doesn't show the marker at all for SAB's with hidden address.
Latest Blog: Does Adding Keywords in an Image Filename Help Ranking?

We deal with quite a few SABs. The issue I think we're going to have is that many of the listings with 'proper' pins actually should have round pins because they're operating from home. Meanwhile, our clients who've been successfully persuaded they should play by the rules and have a round pin are going to have their round pin disappear from the map while their competitors who are breaking the rules still appear.

I await calls of complaint from clients who have never liked not having the pin, and I anticipate some of them changing it back to a pin regardless of what we say.

I agree with Colan about the syncing with new maps being a possibility.

And I TOTALLY agree with Kate's last comments too.

We'll have lots of SABs breaking the rules just to get their map marker back if this continues!

I'm still seeing hidden ones on the map. I searched for landscapers and plumbers, logged in and logged out.
Latest Blog: My backstory, or how I went from GPS to SEO
W

I'm not seeing this here yet in Edmonton, AB Canada. Boy, this sure make is hard to justify doing thing 'by the book', when there are dramatic advantages to unhide a SAB's address.

Have they ever cracked down on the visible SAB addresses? Do you think it's right or ethical to report client's competitors who are SAB's with visible addresses?

whitesell said:
I'm not seeing this here yet in Edmonton, AB Canada. Boy, this sure make is hard to justify doing thing 'by the book', when there are dramatic advantages to unhide a SAB's address.

Have they ever cracked down on the visible SAB addresses? Do you think it's right or ethical to report client's competitors who are SAB's with visible addresses?
Click to expand...

They DID! 3 years ago when this mess 1st hit they deleted thousands and thousands of listings. Many were down for over 5 months and could not be revived. Even a new listing could not go live.

I cover this in the Advanced training you took but I didn't harp on it like I used to because Google told us they stopped deleting listings.

However I have a fairly new post that shows that some listings still are getting deleted on the Map Maker side.

<a href="http://www.localsearchforum.com/google-local-important/26873-hide-your-address-google-local-new-warning-service-area-businesses.html">Hide your Address on Google Local - New Warning for Service Area Businesses</a>

Here is my take on it. I think it's totally fine to report blatant violations like fake addresses, UPS addresses or KW stuffed fake name. They are breaking the rules and it can give them an unfair advantage. And you are helping to clean up the map.

But I personally don't think it's right to report SABs with visible addresses because most don't even know it's a rule. Google NEVER notified businesses when that rule changed. Google NEVER sent warnings to that that didn't comply. I just don't think it's a fair rule or at least was not implemented right IMO.

My gut tells me this is another Google glitch - not the harbinger of some big change. But who knows.

Yes hope you are right and just a glitch.

Thanks for weighing in Phil!

If you mouse-over a SAB it does show their service area. Appears to be a rendering change on Desktop, mobile looks unchanged to me. 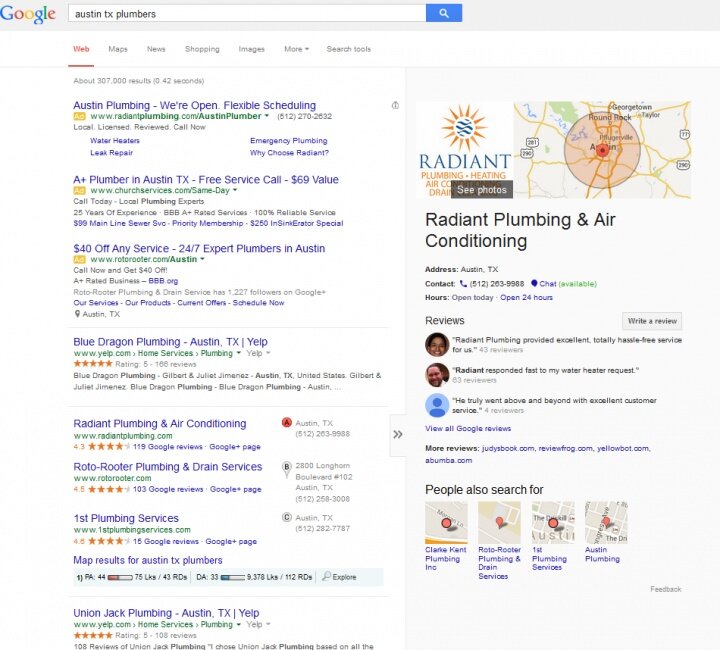 Yes the service areas have been showing up in the knowledge panel like that for awhile now.
Maybe a year or so?

And that pack "austin tx plumbers" is showing normally for me.