Admittedly I don't look at/consult on restaurant and hotel listings or others industries that tend to show up in the Google Local Carousel. So I don't pay as much attention to the carousel as I should.

However Greg Gifford from AutoRevo has been paying attention to this space and tracking the changes. Especially relating to the all important photo Google chooses to show and our inability to control it. 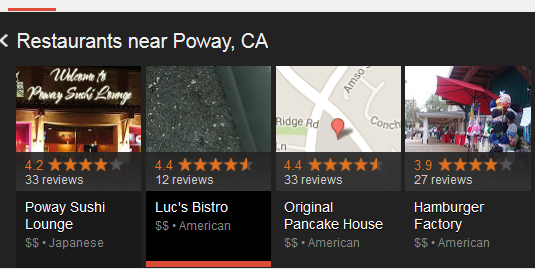 ​
(In the picture above, image #2 is a user shot of a dirty floor, as far as I can tell
and image 4 is a picture of some sidewalk shops, no restaurant that I can see.)[/CENTER]

In the post below, Greg shares some great screenshots and an overview of how the Carousel has evolved over the past year. He also has some tips about optimizing images so in case they get picked by Google, they will show your business in the best light possible.

<a href="http://searchengineland.com/google-local-carousel-still-spinning-control-191451">The Google Local Carousel Is Still Spinning Out Of Control</a>

Almost a year ago, Google threw everyone for a loop with the rollout of the Google Local Carousel. The SEO community scrambled to try to figure out how it worked, and theories started flying about how it would change search behavior. It was immediately evident that a location?s Carousel photo would be all-important?

It didn?t take long to realize the biggest problem with the Carousel: business owners had no control over the photo that gets displayed. There was a lot of buzz about not being able to choose thumbnail photos, but the buzz died down as nothing was updated. At the end of last year, Google quietly began playing with the display images...
Click to expand...

So now I have a question... How many of you have clients that show up in the carousel???

One of the reasons I don't focus on the carousel much is that local search issues seldom come up here for restaurants and hotels. WHY IS THAT? Obviously food and lodging are both huge local industries, yet we seldom here about them here. Why??? Do most of them do their own SEO? Or maybe for hotels, they go with big agencies??? Curious to hear your thoughts.

Curious to hear your thoughts too on Greg's Carousel post?

If you have clients in the carousel, have you struggled with some of the image issues he talks about?

I've had a couple of clients in the carousel. Google reviews seem - seem - to be even more of a factor there.

Weve Got Your Customers

I have a restaurant client with 3 locations - all #1 or #2 in carousel listing for respective cities.

Interesting that 1 of the pics is labeled Owner Submitted and the other two both from a local Event Site.

Any word on what categories trigger carousels other than restaurants?

And yesterday this from the Knowledge Graph
Movie Casts
https://www.google.com/search?q=cast+of+breakfast+club