The Worst Local SEO Client You've Ever Had

I love the new Consultant's Corner here and am really enjoying Linda's thread, Just Say No to Bad Local SEO Clients - Let them Walk!. Knowing how to say no to a bad client is an essential skill in our field. But how about the times a bad client slipped under your radar? I thought I'd start a thread for the purpose of catharsis. No matter how professional you are, you will eventually run into the client from Hades. Here is your thread for getting that bad experience off your chest, even if you've still got a bitter taste in your mouth.

Now, let's not have any outings or bashings here. No company names or details that would out the bad client, but I hope you will share your stories. Sometimes, writing this stuff down can help you let go of it, and that's healthy.

Here's mine from some years back:
A garage door company that was spamming Google like mad, took up hours of my time and then not only refused to pay me, but also made insane, ludicrous, grandiose speeches at me about how business was done in the great state of X, as opposed to my state of California. This person was an ego maniac and a downright crook. We walked away eventually in total dismay about his character.

The second stupidest thing about this situation was that the client had made his downpayment with me via PayPal, but when it came to paying his balance, he insisted that he didn't know how to use PayPal and had never used PayPal and that he would only pay me if I would take a direct credit card payment from him (we don't own a processing machine). It was just ridiculous.

But the premium act of stupidity was on my part. I should never have taken this guy on after seeing what he was doing Local-wise. I thought I could help him get on the straight and narrow. Instead, I wasted hours consulting with a total weasel.

I'm over it now...but it sure took awhile.

Great thread idea for the new forum Miriam. I have a good one, but too tired tonight.

Will try to post it tomorrow and hope some others share their client from hades.
But please do keep Miriam's rule of no names or links.

I tell this story in my training to stress the importance of documenting EVERYTHING on the listing during initial consult and then every step of the way.

Did the initial consult for this client. Luckily had trained myself to document everything. This was back in the old 7 pack days when # of citations and reviews ruled AND citations still showed on the listing. So I recorded # of reviews and citations.

He didn't hire me til 2 months later and I had a 2 week waiting list. So now it's 2.5 months after initial consult when I'm ready to begin. Luckily another thing I've trained myself to do since the very beginning, is to double check everything and record any changes before working on a listing.

I noticed that his ranking had dropped severely. Investigated, found a dupe that stole 80% of his reviews and rankings and again in that pack days that was the algo.

So his ranking plummeted. BEFORE I EVER TOUCHED IT.

Emailed him explaining I HAD NOT EVEN LOGGED IN OR TOUCHED LISTING YET, ranking had dropped. Explained why in detail, how the algo worked. # of reviews and citations before, 80% less now due to dupe stealing them. You know how I write. I was VERY long and detailed about it.

Well he either didn't read my email or didn't believe me. 2 weeks later he checked his ranking on his own. Sent me a SCATHING email. "I pay you all this money to help me not hurt me, you are ruining my business! What have you done to my listing?"

I re-mailed him the explanation, proof and documentation. Tried to explain again. Explained I was working on the dupe and when it was resolved his ranking should come back. Showed him 20 NEW PAGE 1 RANKINGs I GOT FOR HIM, that he didn't have before.

He refused to believe me. (Think he had a problem with women.) He got VERY abusive. Constantly emailed and called being extremely rude and condescending. He talked down to me, like I was a 15 year old 'girl' who clearly did not understand Google or business or the Internet. It was awful.

THEN he posted at the forum where I got most of my business. He basically said "Warning, Warning, if you hire this woman named Linda she will KILL your business just like she killed mine!"

HERE'S THE IMPORTANT LESSON I TEACH - This was now 3 months or more after the initial consult. With all the clients I had at that time there is no way in heck I would have remembered if the dupe was there before MUCH LESS exactly how many citations and reviews he had to begin with. And had I not checked everything before I logged in, I would not have known the reason for the drop.

I might have started to wonder if maybe I caused it, if I had not recorded details as I went along. But since I knew exactly what happened and had proof I was able to defend myself.

He kept hounding me via email and phone accusing me of things I did not do. So I fired him, stopped taking his calls. Then he got 10 times nastier and kept posting on the forum how I ruined his business AND refused to take his calls AND totally just ripped him off.

I always go the extra mile, always have happy clients and have never had my reputation torn to shreds like that before. I was completely devastated. Seriously cried for days and could barely work. Every time I logged in I read a new derogatory post about how horrible I was. It was one of the darkest times of my career.

How did it turn out??? Some of the best PR I've ever gotten and I ended up with several new clients!

Every time he'd post something new and mean another one of my clients (all VERY well known and respected) would post and say - "I don't know what's up with you but you aren't talking about the same Linda I work with" and then they'd go on to explain problems I fixed or how I went the extra mile on this or that. So ended up with about 10 clients ganging up on him to defend me and poking holes in the stuff he was making up about me. (I never contacted any of them or asked them to post.)

The real moral of the story is this though. Had that situation never happened I'm sure there would have been times I'd forget to record all the details of every listing and every single little thing that changes over time - which would have caused countless problems with other listings along the way.

But having that problem with him absolutely ingrained in me how important it is to check and document EVERYTHING. Google changes stuff, bots change stuff, a hidden merged dupe can change stuff. Once a listing goes south you have no idea what's really going on unless you have it all documented!

So WHEW! I'm a little shaken even just recounting that story. (Sorry for all the bold and red - I was SEEING red as I wrote this!) It was awful! But turned out well in the end I guess.

Heh, reminds me of this book that my brother bought last year: 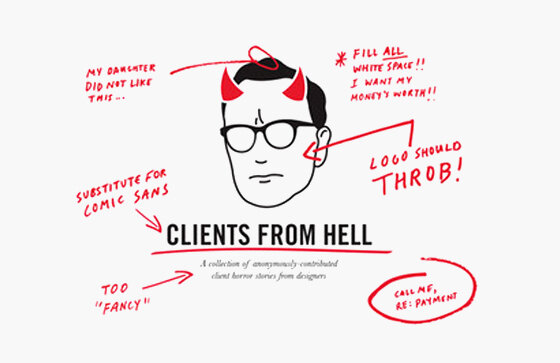 I believe he learned in that book that it is sometimes necessary to 'fire' a client... And he has done so a few times in the last few years.

It really helps company moral to weed out the bad clients.

Linda - That is a bloodcurdling story of a truly atrocious client. I'm really sorry you had to go through that, even though it seems you found a moral to the story. Still, just awful! I was gratified to read the part about your happy clients striking back. That's great! Thank you for sharing about what must have been such an upsetting experience.

It is so weird, when you are an honest person, to be confronted with a liar. My brain sort of starts to shut off in a situation like that. It's like, you're saying, "I play by these rules," and the other person is saying, "I don't play by any rules at all." Anarchy of that kind is impossible to solve.

Fortunately, you know from your other clients how awesome you are! And I second that!


Russ - Ah! That graphic is priceless. The 'my daughter doesn't like it' especially made me laugh. We had the exact thing happen once, after building exactly what the parents wanted. The daughter walked into the room and said, "I don't like it," and then was unable to say why. Arggh! I remember this feeling like I was falling down an elevator shaft. That looks like a great book!

I was going to write a long winded tale of a client that screwed me over both in time (constantly calling me, texting me, emailing me) and in money (stiffed me for $100), but I don't want to bore you and I'm a little pressed for time right now.

Sufficed to say, it taught me a valuable lesson. Always always go with your gut feeling! After the first two phone calls with this joker I had this feeling something was off. My tendency is to give anyone the benefit of the doubt so despite my gut feeling and the glaring signs, I ignored them thinking he might actually be a legit good guy.

I think most bad clients can be avoided by going with your gut feeling and not ignoring obvious red flags. If you have a bad feeling about a client, don't ignore it! 9 times out of 10 your gut feeling will be spot on.