Has anyone else experienced this? I noticed it late last week.

Some of our client's GMB dashboards have a notice saying that Google has updated their business information based on user edits and data with a button to review the edits. When you click on "Review Edits" it takes you to the edit screen where the business address has been altered with an Updated notice by it.

So far, this has been changing things like SW to Southwest (not a big deal), adding the suite numbers to the end of the address on line one as "#840" by taking it off the second line where it originally was (this is a violation, no??), changing my SAB's back to regular addresses (the example in the screenshot above), and incomplete postal codes only showing up with the first 3 characters/numbers (don't know what this means). Most of our clients show up properly in the dash, but some of the edit screens show incorrect addresses. We haven't touched these ones because they show correctly live, in case we break something but I thought that was weird that it shows up wrong just in edit mode? Also we've had some client's dashboards just show a notice to review business information and hit submit at the bottom of the page. And also some of them are completely fine I should add.

An example of the suite # and postal code changed: 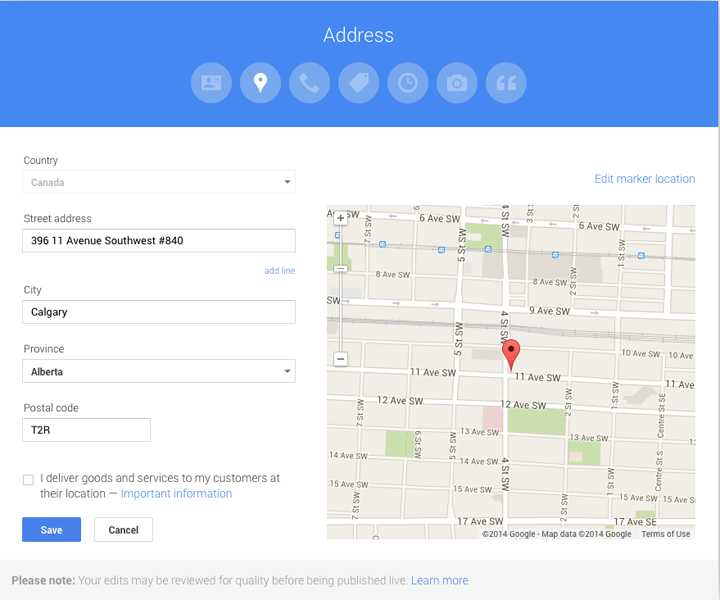 So then, when I go in to edit the ones that show the wrong info back to the way they were, everything looks honky-dory until I click Done Editing and I get a yellow bar instantly saying Google updated the info back again. For a few clients this didn't happen, but for a few it wouldn't change no matter what.

I got on the line with a Google support rep on Monday about this for one SAB client of ours that should be a SAB but got updated - https://plus.google.com/u/0/+BoulevardexteriorsCa/about - we walked through a bunch of steps and eventually he said he has to get his engineers to look at the listing and he would get back to me in a couple days. So far I haven't heard anything. Just an FYI one of the steps was to simply go through all the info in edit mode and open it and click "save" as he said sometimes Google just wants you to confirm all of your information - this didn't work for this client though... This particular client has had some issues in the past though so this could be why this particular listing is messing up, but the rest with changed suite #'s and postal codes are really weird. This listing now shows as an SAB live as of today but still lists the address in the dash. They must be still working on it.

Maybe this is a bug with the new dash's?? The Google guy said something like "it looks like there might be conflicting data from other sources on our end."

Maybe Maps data is conflicting or it has to do with the change over to GMB?

Since Google is changing all my suite #'s to the end of the first address line does it mean that the suite #'s should be formatted as such now instead of on the second line? Is this going to affect our rankings? Why would Google take out the postal code partially??

Thanks Amy, we have a thread with Google about suite numbers missing or getting changed.

But it sounds like you are running into a bunch of different issues.

Sounds to me not like GMB which is the front end dash but some stuff changing on the back end with the data pipeline or something.

And I think it's possible these are the types of changes bots have been making all the time when they find conflicting data - it's just with GMB the messaging is better so they are letting you know when things change instead of just doing it.

I'll add this thread to our email chain about the suite weirdness and see if I can find anything out.

amy.inbound said:
Since Google is changing all my suite #'s to the end of the first address line does it mean that the suite #'s should be formatted as such now instead of on the second line? Is this going to affect our rankings? Why would Google take out the postal code partially??
Click to expand...

Check this post where in the beginning the GMB help docs were conflicting.
Google confirmed it should still go on line 2.

Also FYI I escalated this thread so will share if I learn anything helpful.

Thanks for the link Linda! Good to know about the suite #.

You are probably right in the fact that is it a few different issues going on at once. Makes sense that it's a data pipeline issue with the updating addresses.

I just got a call back from Google about the SAB listing I mentioned. He said it just takes time to update and that it looks good from his end. It's still wrong in my dash though but he said it would go away after a while because it shows correct live... Hopefully he's right.

I'm looking for the relevant Google HC Doc, but I know I read somewhere in it that Google will edit information in the dashboard to match Google Maps data.

So my guess is that the issues we are experiencing are due to this process. And since this is a relatively new process by Google it's in the "ironing out the kinks" stage.
Latest Blog: The Proper Way To Deal with Duplicates in Google My Business [2020 Edition]

You are right Colan, I remember seeing that or hearing Google talk about it.

I think it was maybe just mentioned in our pre-launch demo.